Our second full day in Jordan we left early in the morning hope to get to the Castle of Kerak.  This was a castle or fortress where the Christian Crusaders held their base of operations.  It was about a 60 minute round trip detour from our drive down to Wadi Rum.  We soon arrived at the town of Kerak perched on top of an elongated hill.  A small town was at the base which I think housed many locals whose industry was in oil refinement.  But there was also a small-town sitting right next to the castle on top of the hill.  I knew it was occupied as there were cars parked on each side of the narrow streets.  But with the exception of a people, it was literally a ghost town. 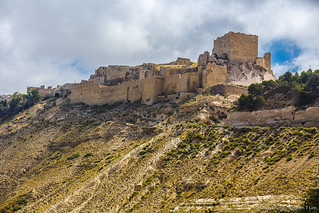 We tried entering the castle, but it was no use.  The entrance was boarded up, some windows were smashed, and the bridges leading to the entrance didnt have any rails.  It even had boards missing that you could fall through and plunge 40 feet.  I wondered if this place was still a tourist destination.   I was pretty positive that nothing online said anything about this place being closed down.  Still it was an impressive intact fortress.  And we ended up driving around the castle all morning through the narrow streets hoping for a better view.

We left a little bit dejected after a few hours and decided to head to our overnight destination Wadi Rum.  We had not seen a gas station for the three hour drive we had.  We were a little bit nervous about potential running out of gas in the middle of the desert in the Middle East.  3 bars, 2 bars of a tank left … the GPS says we should be there already. 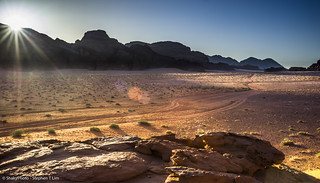 After a scare that seemed to last forever, we finally arrived at the entrance, but no one was around which is always a little bit concerning.  The fact is that we arrived during the hottest part of the year meant to tourists were sparse in the town.  In fact the bedouin that we were staying with didn’t have any other guests staying with him that week.   The good news was that we had a private guide all to ourselves for the next 24 hours.  We’ll talk about that adventure in the next post.

In hindsight, I think we would have been better off with a driver/guide in Jordan.   Trying to guess the small things such as where to get gas, where to eat, or what places were safe always placed a little bit of stress in the back of your mind.  Not to mention a driver would save a lot of time by doing all the driving and mapping out how and when to get there.  Alas I was a little bit more ambitious.  Well at least I could say I was able to drive the roads of Jordan.